Seattle turned out to be such an awesome diver community. I was lucky enough to walk into the perfect shop, Underwater Sports. They have several shop locations throughout the greater Seattle area, and it is a great resource for local diving. I just so happened to walk into the shop north of downtown Seattle, and was immediately recognized when I walked in. Atina set me up with tank fills, and I knew we would get along. She said, “A group of us girls are heading out for a dive. You should come.” So I did.

The weather was incredible, and we went out in hopes of catching a glimpse of a sixgill shark. Visibility was atrocious until we got down to about 25m (75ft). Even though we didn’t see much on this dive, it was nice to take a break from solo diving. Plus, I always love meeting women divers and that night inspired my first ever diver meetup hosted by Underwater Sports. All credit goes to Atina for having the idea, bringing people together, and cooking some banging food for the event.

We didn’t give up on our hopes of encountering the famous prehistoric shark, so we went for a morning dive under a typical Pacific Northwest sky. 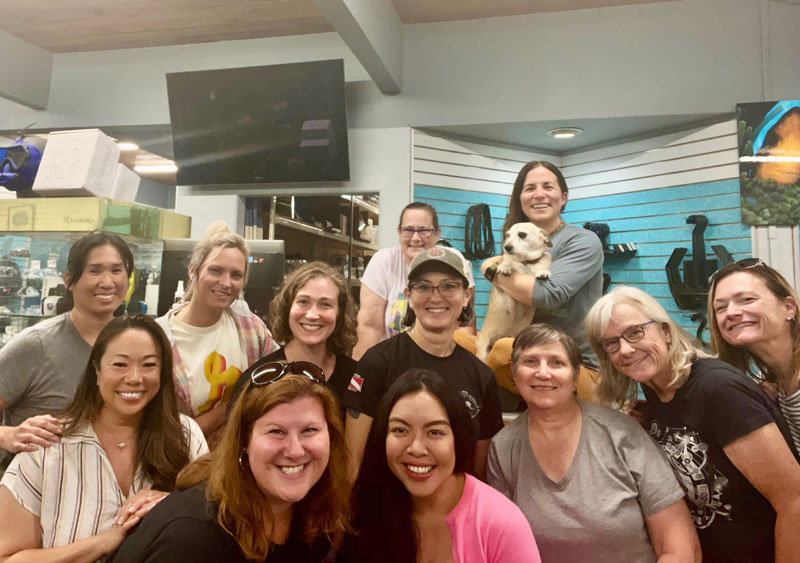 The spotted ratfish is a chimaera and calls the northeastern Pacific Ocean its home. Typically, divers only see these fish at night, but this one was cruising around under the pseudo night created by the foggy morning sky. In general, dives in the Pacific Northwest are very dark. If you don’t have a light, you won’t see much.

I was shocked to see the ratfish show so much interest in me and my camera. When I saw its big eyes, I was convinced it would be a short encounter due to my bright video light, but it kept coming back.

Ratfish live most of their lives in the deep but make their way into recreational limits in the Puget Sound. They use their venomous dorsal fin for defense and have the largest biting force in its subclass of cartilaginous fish.

Did it have an egg here?

The way the ratfish was hanging out and swimming around in one area made me think it could’ve been a female protecting a freshly laid egg, but who knows. It might’ve just liked me. Egg cases are leathery and take up to a year for baby ratfish development, so if you see something that looks out of place but not a recognizable humanmade item of trash, leave it alone. I learned this from my friends who taught me what a Moon Snail egg case looks like!

I’m sure I’ll see a sixgill shark one day, but this was not the time… and that’s ok. As divers, it’s great to have hopes for the creatures you want to see, but it is a necessity to eliminate your expectations. Expectations lead to disappointments and can ruin a perfectly wonderful dive day. I personally choose to be enchanted by whatever weird thing I can find underwater. Keep things simple, and life feels more spectacular.

With these dives, I closed out my time in Washington, but I couldn’t leave without saying hello to Tahoma (Mount Rainier).

There are tons of spots to boondock all along the dirt road leading to BAD ROAD HIKE. I even saw several car campers at the trailhead in the National Park, but you could get a knock or a ticket if you stay without a reservation at the campsite.

On the Paradise side of the park, there is cell reception right at the base of the mountain, so if you need to get work done like I did, it’s a great place to hike and work for the day.