You have probably seen them before. You have probably been warned of the dangers they pose when protecting their young too. But how much do you really know about triggerfish? Find out more about this common reef inhabitant and understand why it has torn off a few fins over the years! The titan triggerfish is a beautiful and robust reef creature just waiting to be discovered.

Know the “Titan” of the reefs: the Titan Triggerfish

This giant triggerfish, or moustache triggerfish (Balistoides viridescens), is a large species of triggerfish found in tropical reefs. It is seen often in shallow reefs, but also to depths of 50m in most of the Indo-Pacific. This triggerfish is the largest of the species with a length of up to 75 centimeters.

They have a non-protrusible upper jaw, with hard, specialized teeth that, in most species, are designed for cracking the shells of various hard-shelled invertebrates. They have independently rotating eyes, and their pelvic fins are fused into a single spine. They have 2 dorsal fins, the first of which is comprised of 3 spines, and this is where the trigger fish derives its name. They can use this spine, along with the ventral spine, to lock themselves into coral heads or rock crevices when threatened, and once they do they are immovable!

This fish is easily found singly or in pairs protecting their areas over slopes of deep lagoons and seaward reefs. Juveniles are mainly found close to isolated patches of branching corals over protected shallow, sandy area of reefs.

The triggerfish search for mating partners and are known to do mating dances with the chosen one. Both sexes will vigorously protect the nesting area.

Sexually distinctive, the titan triggerfish will lay eggs that are fertilized externally. Eggs are laid after some preparation of the nest. They create a depression in the sand of the chosen nesting area by fanning it with their caudal and dorsal fins.

While nesting or not, the male is usually aggressive and can attack unprovoked; a female guarding her nest can be as equally aggressive. They will deftly defend the nest even against intruders much bigger than themselves.

Titan triggerfish spawn for about 4 days a month. The male will guard the nest and blow water over the eggs, ensuring a good supply of fresh water and oxygen. Once the larvae hatch, they will swim away, presumably into the protection afforded by the coral reef.

Early on in the life cycle, zooplankton will be the source of nourishment until such time as the juvenile has matured enough to take on other delicacies of the coral reef. 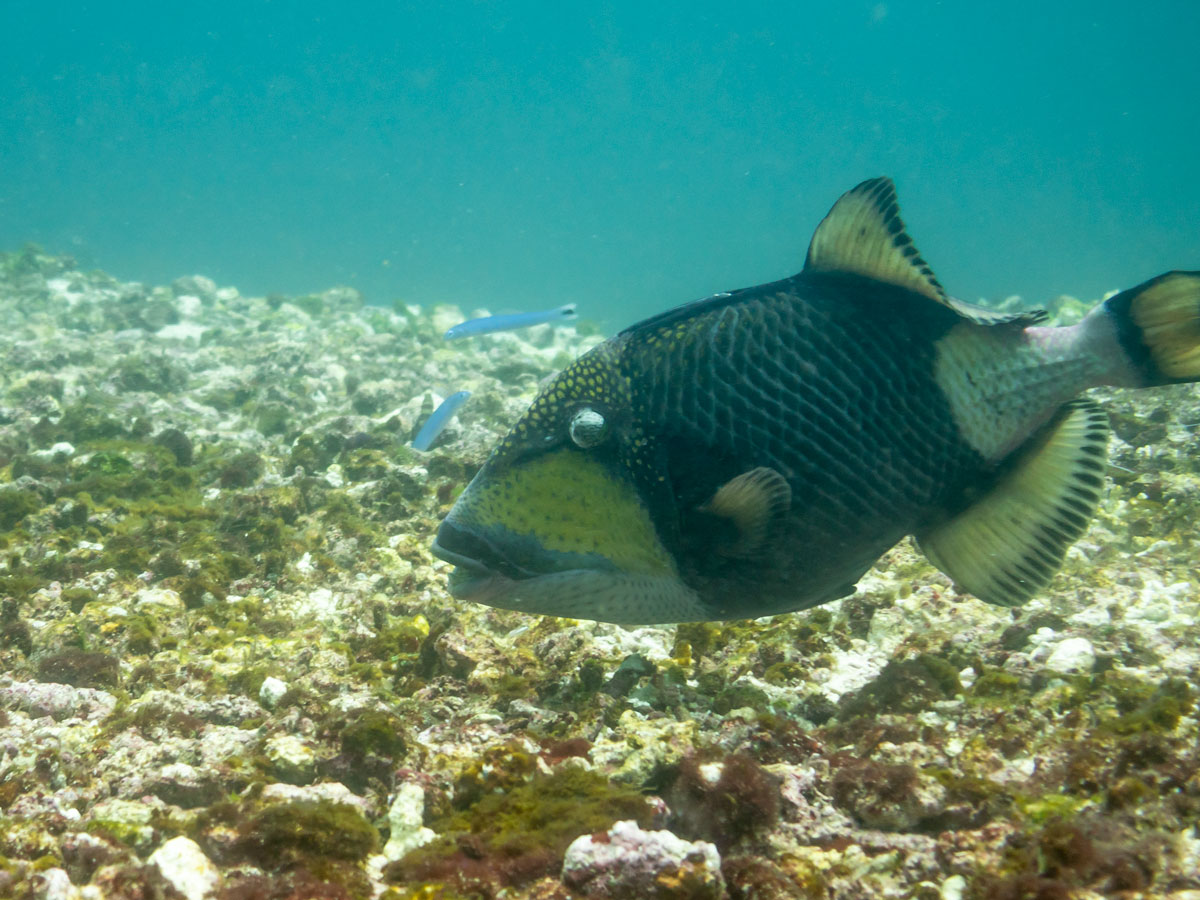 Titan triggerfishes are the workers of the reef, often busy turning over rocks, stirring up the sand and biting off pieces of branching coral. This is why you will often see other, smaller fish species around it feeding from the left overs.

Triggerfish have a hard spine Dorsal Fin that can be locked. When sleeping, this spine is used to wedge them into place in a crevasse and so deter predators from pulling them out of their bed!

The spine is also held erect as a warning to other fish to stay away (a good reminder for you, the diver!) If this warning is ignored, they are known to charge at anything and anyone.

Interaction with divers and snorkelers

The titan triggerfish is usually wary of divers and snorkelers. During the reproduction season, the female guards its nest, which is placed in a flat sandy area. The territory around the nest is roughly cone-shaped and divers who accidentally enter it may be attacked.

The threat posture includes the triggerfish facing the intruder while holding its first dorsal spine erect. It may also roll onto its side, allowing it a better look at the intruder. The titan triggerfish will not always bite, but can swim at snorkelers and divers escorting them out of their territory.

So what to do when you tick off a Titan Triggerfish?

One useful thing to remember is that a triggerfish sees it’s territory (a.k.a the ‘Danger Zone’ you want to avoid being in), starting in a small area around its nest and rising to the surface in the shape of a cone.

Your best plan of action if you see one is to swim away horizontally. Most divers make the mistake of swimming upwards to escape the wrath of the crazy fish that’s trying to chew their fins off. However, to the triggerfish, it appears that you are getting further from leaving their turf, and it will re-double its efforts to persuade you to leave. Keep your eyes on the fish at all times, as hard as it may be, as they are fast. They have also been observed to go for bright colors so if they come close, try and get your fins or a hard object like an underwater camera, a dive slate or other scuba gear between you and the titan, needless to say it’s better to have a hole in your fins rather than your body!

If you are an unfortunate victim of a triggerfish bite, it should not be treated lightly. Their bites can cause serious infection as they contain a natural poison called Ciguatoxin. However, as long as the wounds are cleaned and tended to, you shouldn’t have complications.

Despite their occasional bad attitude, the titan triggerfish is a funny fish to watch. Next time, take note of how they move and the work that they do. Just make sure to have a good ‘quick reverse’ in case they decide you’re too close!