Dugongs, also known as sea cows, sirens or mermaids of the seas, are mammals that you can find in the warm coastal areas in the Red Sea, Indian Ocean, and the Pacific Ocean. One Dugong habitat in Indonesia is found right here in the Komodo National Park. We are lucky because sometimes we can spot them in some of our most frequented dive sites.

Although dugongs are related to obvious species like manatees, you will be surprised to know that they are close relatives of the land elephant! They are grey in color and have two front flippers, one big flipper similar to the cetaceans which help them to move underwater. They are not fast swimmers, maybe because they have heavy, dense bones. Their lungs are positioned in their back, which helps them to keep a horizontal position while swimming.

They have fantastic hearing which helps them compensate for their poor vision. In older stages of their life cycle, males can even grow tusks (also sometimes seen in very old females).

Dugongs life expectancy is about 70 years old. They are social animals, although seeing them in large groups is unusual as they would be competing for the same food. If you ever see two together it is most likely that they are a mum and calf.

Dugongs are the sole animal species in the world that is completely herbivorous, their base diet being seagrass (although sometimes when the seagrass is scarce they can also feed on algae).

Although they live a long time, their reproductive cycle is also very long. They reach sexual maturity when they are 9-15 years old. Pregnancy lasts more than one whole year (12-14 months) and dugongs only deliver one calf at a time. Female dugongs have one calf every 3-7 years (meaning they have a slow and low reproductive rate). Calfs will breastfeed during the first 18 months and stay close to their mum until reaching sexual maturity at which time they will leave and seek a partner. 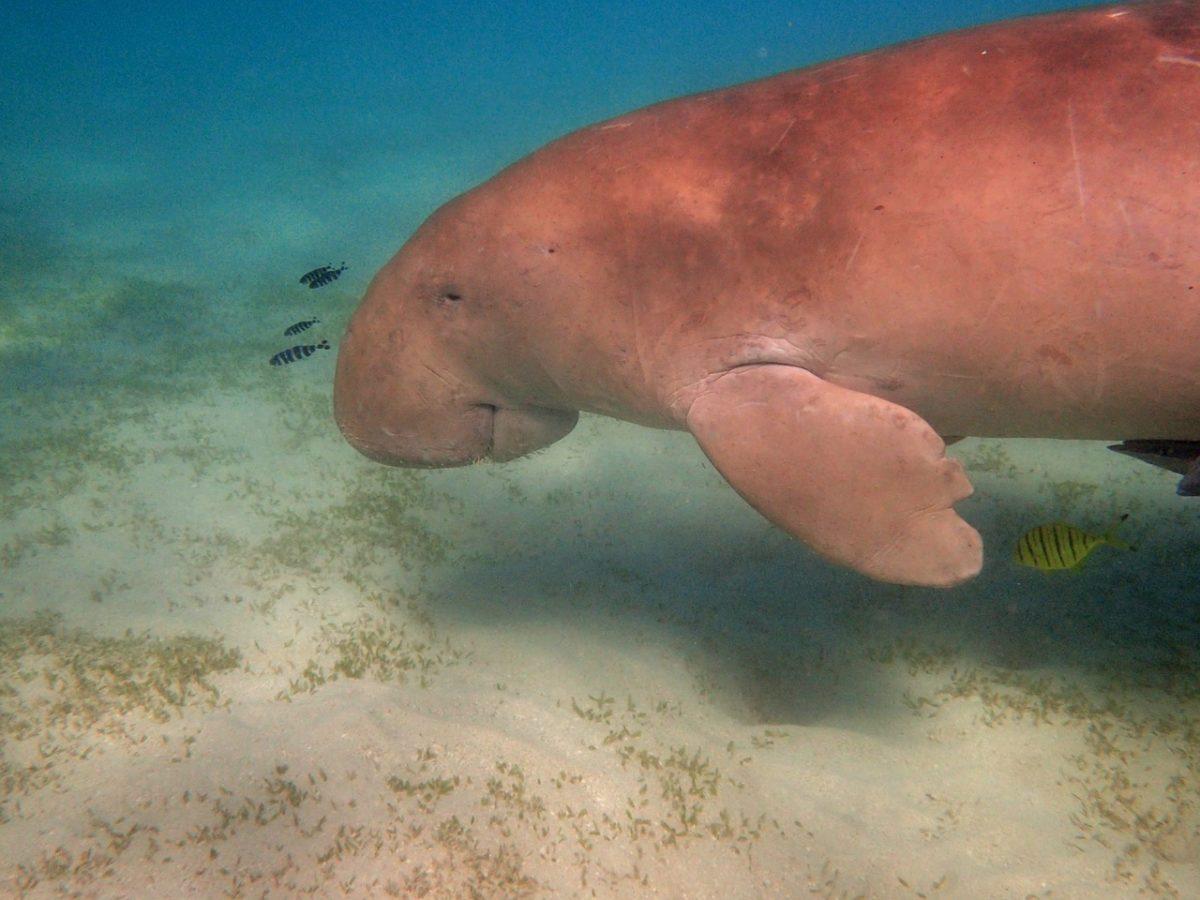 The Dugong habitat in the Komodo National Park

Dugongs can be spotted at the surface, while you ride on your diving boat as well as in some dive sites in the Komodo National Park like Siaba Besar, Mawan, Wainilu,…

If you ever have the chance to see one of these mammals remember to behave underwater, do not chase, harass or touch any marine life and just enjoy the view. If you get too close to them they may leave soon and you will miss the chance to enjoy their company underwater.

Dugongs are listed as vulnerable and endangered species; their numbers have dropped in the last years mostly due to overfishing and destruction of their habitat (human actions). We can even say they are now extinct in a large number of areas such as the Maldives, the Phillippines, Mauritius, Hong Kong, Japan, Cambodia, and Taiwan. Dugongs are easy targets for hunters as they are large and slow moving so they have been over-hunted for their meat, oils, skin, and bones.

Other threats have included entanglement in fishing and shark nets, oil spills, being hit and injured by boats (propeller injuries) or even bad storms and cyclones which can wipe out huge areas of seagrass.

All these and the fact that they have a slow reproductive cycle put them in a big risk of becoming extinct.

We hope that when you come to Komodo you are lucky enough to spot these beautiful animals, whether is from the boat or if you have the chance to do it while you are diving.

Buen Azul and looking forward to having you here!