Dealing with Currents While Scuba Diving

Welcome to EPISODE 03 of my DIVE DRY ROAD TRIP. In this video, I explore the dive site Flag Pole in the Hood Canal, Washington. Let’s talk about dive planning with currents and an incredible creature easily found at this dive site, the Wolf Eel.

One of the ways to dive Flag Pole is to check in with Mike’s Beach Resort and pay a $20 fee. This gives you access to the dive sites and full use of bathrooms, hot water shower, and rinse area at the Resort. The dive site is located south of the actual Resort. There is a turnoff with several drive ways, all of which are private lanes, except for the one closest to Mike’s Beach Resort. There is a tiny sticker on the gate to indicate you’ve arrived at the correct location. The road down to the beach is short, but steep, so don’t try it without a high clearance, four-wheel or all-wheel drive vehicle. It’s definitely walkable if you don’t have the right car.

The dive site is located a decent swim offshore, so the easier way to dive here is by joining a boat trip. 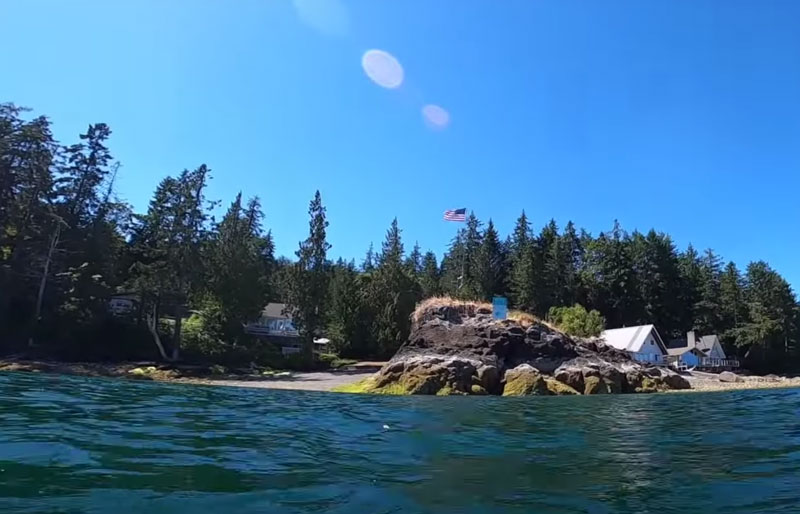 If you do decide to do this from shore (or any dive site that is less protected from currents), there are a few things to keep in mind:

If you do not reach the dive site due to a strong wind, it’s not a big deal. Descend a few meters underwater and navigate to the site or back to shore.

I was surprised to find out that Wolf Eels are not actually eels! It makes sense when you see them out and about because of their prominent dorsal and pectoral fins. This fish got its name because of its long body, powerful jaws and sharp teeth. It uses these tools to eat sea urchins, fish, squid, crabs, sand dollars and even clams or mussels. They are orange and purple as juveniles and turn to brown/gray/green as they mature, with the females more on the brown side.

These creatures can be found along the Pacific coast of North America (even as far out west as Russia and the Sea of Japan), and they make their homes in holes along the reef. They can live up to 25 years, getting as big as 41 pounds and 8 feet long. They seem to be doing alright in the world of conservation since their only real predators are harbor seals and sharks. Humans typically do not consume Wolf Eels since they are challenging to catch.