Sharks have been around for about 450 million years, and now they may face extinction due to human actions in just a few decades. Humans kill around 73 million sharks per year just for their fins.  Many shark species are already near extinction because of shark finning and the increasing demand for shark fin soup.

What is shark finning?

Shark finning is when fisherman remove the fin from the shark, usually while it’s still alive, and then discard the rest of the body overboard. They are only interested in getting the fins, because that’s the most profitable part of the shark. The meat is not very valuable. By discarding finless shark back to the ocean, a lot of space is saved on the fishing vessel, which means more fins and more money. Also less labour when fisherman don’t have to bring the shark body to the port for processing. But due to this practice sharks face a cruel, slow death. Without the fins sharks can’t swim so they sink to the bottom of the ocean to die due to suffocation, blood loss or by getting eaten by predators.

Plus, shark finning is unsustainable….

Why is shark finning a problem?

“Cutting fins off sharks is not illegal in Indonesia, but the practice of finning them at sea, and throwing their helpless bodies back overboard, is believed to be one of the biggest threats to shark populations.”

Humans are the scary creatures…

There are 440 species of sharks. It’s estimated that 100 million sharks are killed by humans every year, around 11,400 every hour. Almost 60 percent of sharks are threatened by overexploitation, and some species are already critically endangered. In comparison, sharks kill about 6 people per year. It’s obvious that sharks should be scared of us, not the other way around.

Killing sharks is bad for the environment

Sharks are killed at a faster pace than they can repopulate. Female sharks typically take a long time to reach maturity and reproductive rates are low. Shark finning is causing an imbalance and harming the ecosystem by removing the apex predator from the ocean ecologies. Without sharks, the health of our oceans is at risk. Finning has already had a huge impact on shark populations and if the practice continues, fisheries are going to crash and some of the shark species are going to face extinction.

Why we need sharks

Sharks play a very important role in the oceans. They are keystone species which means that other species in the ecosystem need them. Without sharks, the whole ecosystem would collapse. These apex predators control the species under them, keeping other fish population in the right proportion for the ecosystem. In that way, sharks help maintain biodiversity and health of the the reefs. They don’t let any prey species to get too populous and harm the ecosystem. Sharks also eat dead carcasses and pray on the weak or sick individuals. In this way, diseases don’t spread and the fish population stays healthy.

”By taking sharks out of the coral reef ecosystem, the larger predatory fish, such as groupers, increase in abundance and feed on the herbivores. With less herbivores, macroalgae expands and coral can no longer compete, shifting the ecosystem to one of algae dominance, affecting the survival of the reef system.”

It’s important to understand that when sharks are gone, coral reefs will decline and that would lead to loss of commercial fisheries which are lifeline for many.

Why is shark finning happening

Hong Kong is the largest importer and market for shark fins. They take up to 50-80% of overall import in the world. In East Asian cultures, shark fin soup is a pricey delicacy. It’s usually served during special occasions and represents prosperity. A bowl of shark fin soup can cost around 100 US dollars and up. Shark fin soup is not important for human health or survival in any way.

Shark finning is a prolific practice for fishermen, even though they actually only get a small slice of the money that is made in the shark fin market. One kilogram of shark fins can sell for $650 US dollars. 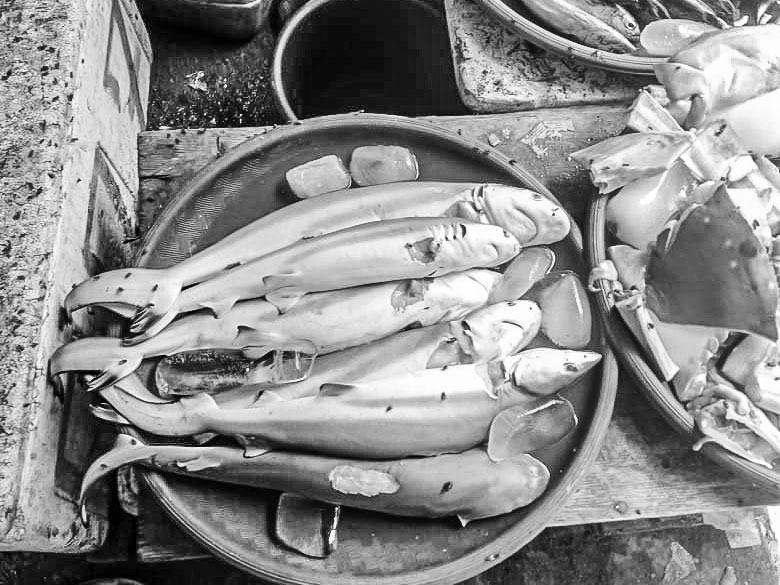 Indonesia is right in the middle of the industry

Sadly, the industry is booming and a lot of sharks are killed in Indonesia. It’s believed that more sharks are slaughtered in Indonesian waters than in any other country in the world. In poor regions of eastern Indonesia especially, finning is abundant.

”Around 30 percent of Indonesia’s 117 known shark species are considered threatened or endangered. ”

Some countries have banned this practice and make the fishermen bring the whole shark back to the harbor, where they can then remove the fins. This at least makes fishermen responsible for the quantity of sharks they are hunting, but more strict rules should be applied.

Shark meat has been eaten for centuries. In some cultures, like in China and Japan, shark meat is believed to have some medicinal and health benefits (modern science has proven these believes wrong). Shark fins doesn’t actually have any taste. Also shark products can contain dangerous levels of heavy metals and toxins, which can be a health risk for humans.

That being said, there is no need to blame the fishermen for this epidemic. They are responding to demand and making money to feed their families. This is why we shouldn’t hate the fishermen. We need to make people stop eating shark fin soup or using fins for traditional medicine. If there is no demand for shark fins, these workers would look for another source of income. They could have the opportunity to turn to tourism or to more sustainable fishing practices.

There’s not any valid argument as to why one should continue eating shark fin soup. You don’t get any health benefits from it and people can find other ways to show off their social status. (Let’s just put a high price tag on pumpkin soup and that’s it!) It’s up to us to push for the banning of this cruel practice. Start supporting the legal actions being taken to protect more sharks species before it’s too late for these beautiful creatures.