Water is the most abundant component of your body, assuming almost 70% of the weight of an adult of normal composition. Water participates in almost all of the vital processes of our body, chemical reactions, heat transmission phenomena, etc. Salts are also involved in the neuroendocrine regulation of your body. Virtually all cell membranes are permeable to both components. Therefore, both the lack of water and salt can have a deterioration in your health.

A very important aspect of any sport is hydration, which in the specific case of diving seems to lose importance because it happens in an aquatic environment.

You know by now that fluid intake is essential in the diet of any athlete. This is because physical activity results in a lot of water lost due to perspiration.

The ingestion of liquids is one of the most important elements for the establishment of a correct eating routine, which is essential for the proper development of physical activity. Keep in mind, an unbalanced diet will undoubtedly cause a decrease in the overall performance of a scuba diver.

Diver Physiology and the Role of Hydration

You would be surprised to know how many divers forget that dehydration is possible while scuba diving. This is undoubtedly a big mistake. Once the body is submerged in water, it experiences a series of changes necessary to adapt to the environment. These changes include the loss of water due to an increase in diuresis (excretion of urine).

During a dive, you will find yourself at temperatures below your basal temperature (37ºC) and you breathe at a higher pressure than outside the water. These two situations produce a phenomenon called diuresis, which causes about 350 cc/hour of the water contained in the blood to be lost which results in urine production being 5 to 6 times higher than normal levels.

When you dive, the body loses an amount of water vapor almost double that in normal breathing due to the compressed and dry air in your tank. This is because all of the air’s moisture has been previously removed. For proper gas exchange in the body, it is necessary that the air that reaches the alveoli does so at a temperature of 36º C and saturated at 100% humidity. If the air entering the body is super dry, that means the body is adding humidity to the air with the body’s water reserves which contributes to the diver’s dehydration.

But not only that, any kind of physical activity as demanding as diving (more or less 400 kcal can be burned per dive), causes a very important loss of liquids. This liquid is expelled through sweat and also from breathing (which will aim to regulate body temperature).

Consequently: diving is one of the most dehydrating sports of all that exist. Doctors point out that people should drink an average of two liters of liquid daily. Therefore, due to the dehydration caused by diving, a scuba diver should be mindful of upping that intake.

Loss of water and the way the body reacts

Dehydration leads to muscle fatigue, which can often be the main cause of an injury. Take good note of this data: the percentage of decrease in the ability to perform a job is ten times higher than the percentage that the loss of water means in the total weight of the individual; This means that a person who loses an amount of water equal to 1% of their weight will decrease their capacity by 10% … (the numbers speak for themselves).

When diving, you subject your body to a significant loss of fluid. If you do not compensate for that, it will lower your performance and resistance. This will make you susceptible to suffer cramps and, in more worrying cases, can lead to the dreaded “heat stroke.”

For all these reasons, you should never wait for the symptoms of dehydration. You must keep in mind that when thirst appears it does so as an alert mechanism of your body, which informs you that dehydration has already begun.

It is therefore essential that during a day of immersion, you drink constantly, even if we are not thirsty. 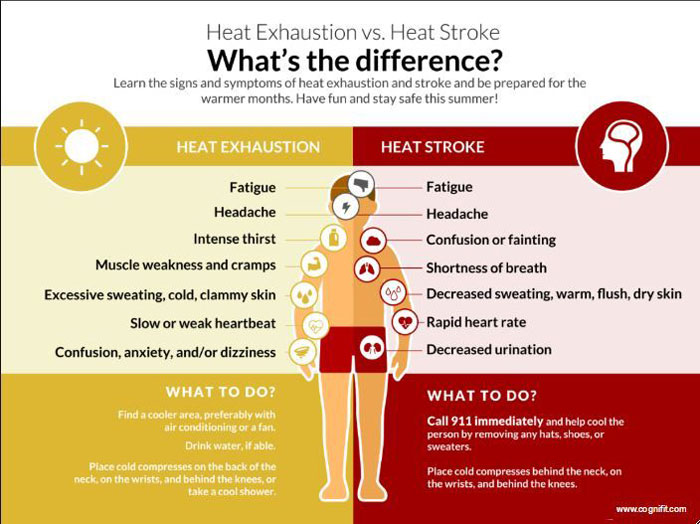 This occurs while enduring prolonged exposure to high temperatures as well as the loss of water and electrolytes (sodium, mainly).

The most frequent symptoms are weakness, tiredness, thirst, tingling in extremities and confusion. Headaches may also appear (which will get worse when you get up), nausea, vomiting, and diarrhea, muscle cramps, tachycardia and hypotension, pasty tongue and hyperventilation.

The skin may be dry or sweaty, but the mucous membranes will always be dry. As for body temperature, it can be the usual 37 or reach 39 °C.

If these symptoms appear in a diver, the treatment to be followed should aim to increase heat loss and replace water losses, for this, you need to act as follows:

It is necessary to monitor the victim to prevent them from evolving into a more serious heatstroke.

Decompression models assume that normal circulation transports inert gases to and from the tissues. Dehydration reduces the quantity of blood available for gas exchange, slowing gas removal from the body. For this reason, dehydration has been thought of as a predisposing factor to DCS, and it does seem frequently associated with DCS cases. As a rule, always drink fluids before diving, as well as hydrate after it to prevent the appearance of any symptoms, even if it was a relaxing dive. Of course, avoid alcohol, not only for its effects on the nervous system but also for the dehydration it causes.

In general, keep yourselves hydrated when diving. Eating fruits with high content in water can help as well!